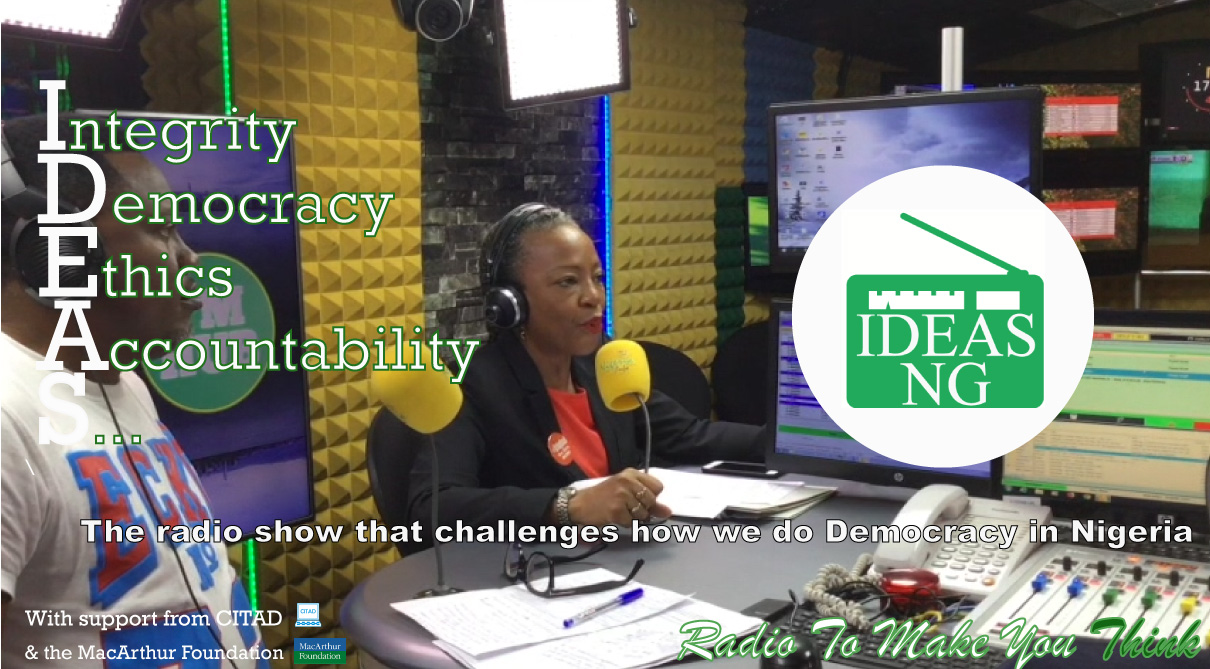 IDEAS Radio 8 May 2020 The Oronsaye Report and IDEAS Aghogho Oboh: Shaku maku everybody!  I...

Now next week, the 4th of May to be precise, Lagos, Ogun and the Federal Capital Territory would begin a modification of the Federal Government-imposed Lockdown. Now one sector whose voice has been somewhat muted in Nigeria’s battle against the Corona Virus Disease has been that of organised labour. As the country joins the rest of the world in marking International Workers’ Day today, let us consider whether there are any IDEAS – talking about issues bordering on Integrity, Democracy, Ethics and Accountability – of particular concern to workers and organisations set up to fight for their interests in the COVID-19 crisis.

Ok, so what I will do is try to reach out to Ayo Obe again, so that we can set the ball rolling. Remember I said that today we’re looking at the Federal Government, the NCDC and the Corona virus testing strategy. Now Nigerians in Lagos, Ogun and the Federal Capital Territory are currently in the third week of a Federal Government ordered lockdown, and various states across the Federation are also grappling with a range of different varieties of lockdown

Yeah, as you know, IDEAS radio’s brief is to look at issues of Integrity, Democracy, Ethics and Accountability. And … so really it’s … our focus is the prevention of corruption and the promotion of transparency.

Yeah, I mean, I thought that … because you may remember that we discussed it a month ago, at the end of February, and we talked about the issue of trust, and how, because we have an Integrity, Ethics and Accountability deficit, that we have this trust deficit. But I think that since then, events on the Corona virus front have really moved on apace, if I can put it like that, in the sense that we seem to be having

Well, technology is what allows us to stay in touch, even though I have a bit of an echo behind me. But … It’s been a very instructive period since we last talked about the issue of trust and belief in what our government authorities are telling us Rotimi, because it seems to me that the issue that we want to discuss today, which is the Abule Ado explosions … comes in with some of the same issues actually.

And good evening everybody in the studio, because we’ve got a lot to discuss. Obviously what I really wanted to discuss with you guys from BudgIT, Damilola and Olaniyi, are some of the IDEAS issues that arise from the Budget, but I thought that in light of the disclosure, or the confirmation as Aghogho said, that we have a confirmed case of Coronavirus in the country, that there are some IDEAS issues that arise before we get to the budgetary aspect of it.

You’re welcome. Ier, as I was saying, what IDEAS tries to look at in issues of moment, are Integrity, Democracy, Ethics and Accountability. Now it comes under the general heading of anti-corruption, but as we always say, corruption is not just about the money and where that’s gone. Because in … when a report of this nature comes out, I think – I mean, before I get into the issues of who is accountable for it –

The BBC report is about a particular form of torture used by the security agencies in Nigeria called ‘Tabeh’. But it … it speaks to … they focused on a particular form, but it actually speaks to the wider issue of Accountability, and that’s why IDEAS, which as you know is about Integrity, Democracy, Ethics and Accountability, that’s why IDEAS is asking this question: Who is being held Accountable where the security agencies breach the laws against torture?

Yeah, I mean I think Rotimi, the first thing that we need to, when we’re talking about IDEAS, this is not … people have been talking about this as though it is a political decision by INEC, or as though it is a subjective matter within the discretion of INEC. And so I think that if we are trying to see: Is INEC behaving … with … in an Ethical manner, behaving with Integrity and so on, we need to emphasise that actually, at this point in the proceedings,

Well, as I said, there are … this matter raises IDEAS issues, because as you know IDEAS is about Integrity, Democracy, Ethics and Accountability. And one of the issues, one of the questions that has been raised, is that: Where does this come from? … And the Government, in its publicity, is saying: It is the 2018 law, Transport Sector Reform Law of Lagos State, that we are merely enforcing. Ok? So that’s one aspect of it.

But before I get into the discussion with Joshua about the role of the creative arts in public awareness, education and so on, I should say that one of my … our correspondents on Twitter did express some sorrow that the programme only lasts for such a short while, and that we should have some phone-in. And so I was sort of saying: Yes! You see! My listeners are keen to have me! Then he said: Yes, because I wanted to correct a mistake that you made in your last programme! So I think I should correct that mistake, which was that I was talking

Hello Rotimi. But I always like to try and accentuate the positive, so I would rather say that rather than saying we’re going to look at abuse, we are going to look at the IDEAS issues in the use of public property and the use of public power generally. I mean, the one that springs to mind immediately, the one that I put out on the Twitterfeed, was the question of so many people who were trying to register for JAMB (the Joint Admissions and Matriculations Board) examinations, and they were instructed that they would not be able to register unless they had their National Identity Card.

Well, it’s in the same stand … it stands in the same shoes as the Hisbah in Kano, because I notice that the … the National Congress of Northern Youths, or some similar group, had complained … National … Northern Youth Council of Nigeria … had berated the South West Governors for establishing Àmọtẹkùn, and I’m just thinking to myself that the issue should not be that because the Governors have joined up together.

Well, it’s not … flood has been our own issue. Flood, soil erosion and so on. But Rotimi, we … if we’re talking about what we don’t want to come our way in 2020, that’s one thing. But the President in his New Year message to Nigerians, did tell us about a lot of the things that would be coming, not just in 2020, but in fact, one of the first references that he made, was in his speech, where he talked about what would be coming in 2023: which is to say that he would not be contesting for elections.

Oh, really?! Well, definitely I have to first of all say ‘Compliments of the Season’. I hope that all IDEAS listeners had a Merry Christmas and that they are looking forward to a Happy, Prosperous, Peaceful etc. etc. New Year. One of the things that may or may not determine the shape of the New Year is the topic that we’re going to be discussing today Rotimi, which is the apparent volte face by the Attorney-General of the Federation over the issue of compliance with orders of court. You will recall that a few weeks ago, when the Attorney-General

IDEAS Radio 20 December 2019 Prof. Bolaji Owasanoye, Chairman ICPC  Aghogho Oboh: Alright, welcome welcome back, it’s nine minutes past four in the city of Lagos.  I didn’t even understand what the traffic is like out...

Thank you very much. Well, I know that people will be thinking that … will be anxious to hear this … what was originally a mystery … a mystery guest that Rotimi has in the Public Square, but I want to say that we on IDEAS, we are looking at always the Integrity, the Democracy, the Ethics and the Accountability in the issues that actually may affect us in our day-to-day lives and in our relationship with the government. And that’s why I’m so happy to have on the programme with me, Tunji Andrews. You all know him, he’s an economist.

IDEAS: Episode 53: The IDEAS in #16Days of Activism Against Violence Against Women

we’re going to be looking at the issue of the IDEAS component when we think about Activism Against Violence Against Women. And I’m actually a little bit stirred by … on this subject because there was a tweet on my Twitter feed of a confrontation between an … very much aggrieved consumer of electricity and representatives of an electricity company in Lagos. And the … one of the representatives of the electricity company was a woman and she was holding a wire and the … or some cable, and the aggrieved consumer was also holding the cable, and they were sort of dragging it, and the man was obviously – I mean, I would say he was at breaking point – but at the point of his … as part of his reaction he started stripping himself and then he threatened to rape the representative of the electricity company, at which point of course she let go of the cable

Ok. Well, Bayelsa is … I think Bayelsa is a little bit … there are two parts to it. We’d already been discussing the fact that there are so many … there are so many security agencies deployed in the state, and, you see there’s a point at which it becomes counter-productive, because as I said, if the intelligence agencies and the security agencies had done their job and were working in harmony, then there shouldn’t be a need for such overwhelming security presence, unless the purpose of the security presence is something else, which is to say; either to intimidate voters, or it could equally be, to again pass a message to those who might want to use violence in the elections, that we’re on ground to stop it.

I want to introduce Adeolu Adekola, he is the Senior Programme Officer of the Wole Soyinka Centre for Investigative Journalism … and he’s here to talk to us about the investigation that has been carried out under the auspices of the Centre and others into the huge amount that’s been spent on Nigeria’s electricity over the past 59 years. And for me, there are two aspects to it. One … because in IDEAS we deal with Integrity, Democracy, Ethics and Accountability.

And so, the discussions we will be having today, will be on whether the Budget was made for the rainy day or not. This week it’s been the Budget 20 … for next year, presented by President Muhammadu Buhari to a joint sitting of the National Assembly. And the clock is ticking, because the common saying from the Executive and National Assembly has been that they want to go to a January-December schedule. I don’t know whether that’s possible or not.

We want to look at the issue of the role of the Nigerian Judiciary as regards Integrity and Democracy. And I think it’s important that we try to separate out the difference between what a government wants, and what an independent … an independent judiciary owes in a Democracy. I say that because I often hear people talking about: We should have our judges elected.