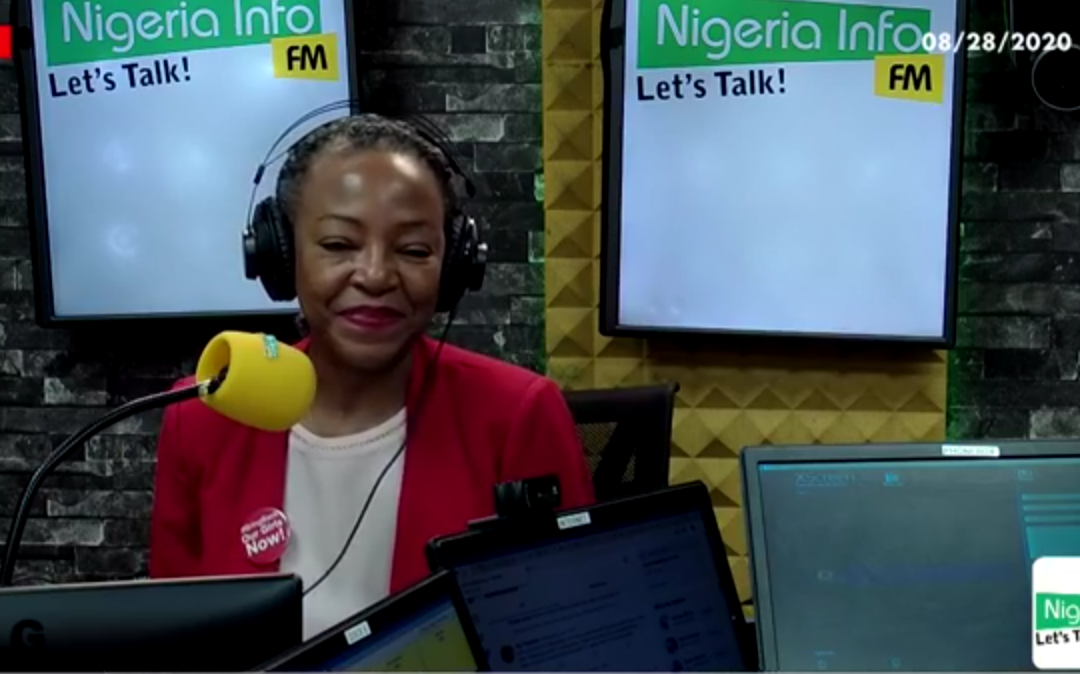 Well, as you know Aghogho, at IDEAS radio … I mean you know IDEAS stands for Integrity, Democracy, Ethics and Accountability, and we are often having to speak about the Accountability component in these matters. And Accountability is really about the obligation of government to provide security for Nigerians … at the most basic level that means securing their lives and property, but it also covers issues relating to health, education, employment and shelter, by which I mean that government has an obligation, and is Accountable for providing those things or the means to obtain them if they are absent.

“many people didn’t know we were doing any thing with Constituency Projects until we published our report.  They didn’t know we were watching the Ministries, Departments and Agencies and their practices until we published our report.  So when we have something to say [that’s the ICPC], because the public has a right to know, then we will say it.  But the media also needs to help, by understanding that you cannot just talk to the media every second about what you are doing.  It also undermines the integrity of the process and ultimately could defeat it because the people you are trying to investigate will then go and prepare for you.”

So, I think that’s … the two different styles that we’re seeing of the different agencies of the government, both of them have their …

AgO: Okay, you were knocking at an online door last week and apparently it did not open.  So, for all the good stories we’ve heard about the election for the NBA’s President, it appears that the sore ones apparently, we’re just beginning to hear about just now.

AO: Well, I don’t know about sore, I mean it’s true Aghogho, that even though I’m a fully paid up member of the NBA and my branch, and even though I verified my registration through the NBA portal, and even though during the course of the day I made three telephone calls to the NBA help line and sent two emails, I was still unable to vote.  I mean I must say that the NBA help lines were very efficient in that they answered the calls without any delay, but essentially, all they could do was say: Send an email, and unfortunately when I did so, that was where the process ended.

IDEAS Radio 24 July 2020 Legislators and IDEAS  https://soundcloud.com/deji-burner/legislators-and-ideas-episode-84-2472020 Aghogho Oboh: Alright, here we go.  Fine, fine afternoon in the city of Lagos, hot and humid if you ask me, and I’m looking at my weather...

IDEAS Radio 10 July 2020 Impact of COVID-19 and IDEAS issues https://soundcloud.com/deji-burner/impact-of-covid-19-and-ideas-issues-episode-82-10720 Aghogho Oboh: Hey, shaku maku everybody!  A fine, fine afternoon in the city of Lagos!  One of the afternoons...

Now, when you look at the NCDC figures released yesterday they showed that they’ve tested 122,155 … or they’ve carried out that number of tests, but actually, the National Coordinator of the Presidential Task Force on COVID-19, in his press briefing yesterday that you referred to, he said that for every COVID-19 case, there are a handful of missing cases, because the health authorities aren’t able to test everybody. Now, to be frank Aghogho, I’d say that Mr. Aliyu is being a little bit conservative when he talks about only a “handful” … especially when he goes on to talk about “thousands of people”. So yes, it absolutely is the right time to ask whether we can rely on the Integrity of the official figures. And in fact, I’m sorry to say that the answer to that question, even from his own mouth, seems to be ‘No’.

the truth is that between the President-elect Olusegun Obasanjo and the outgoing military dictator General Abdulsalami Abubakar, they went out of their way to make sure that there was no handover on June 12th, which they could have done, I mean, it was just going to be about a couple of weeks’ difference, and they could have made June 12th the handover day and then we wouldn’t have to have this sort of discrepancy between the two things. I think that … generally, we are … as I say, our democracy is very much a work in progress.

Well, Aghogho, the first thing is to remind ourselves as you said, that some of the context … the … the components of IDEAS are Integrity and Accountability, and certainly, obviously if there are atrocities perpetrated by our own government’s security agencies, definitely they have to … there has to be Accountability for that; it’s not a matter of the Police or the Army being accused of atrocities such as killings or torture and so on, and then nobody is held to account.

Well I think in this case there are actually at least three of them: the Integrity of the decisions that are being made, the Ethics that are being brought to bear, and the Accountability. Now Ethics of course, it’s always about finding the balance, because we all know that … minds are increasingly focused on the economic impact of COVID-19, and that’s why you see this growing push for places of work to reopen. And in fact, if you will recall that yesterday the National Economic Council, which is chaired by the Vice President, set up a committee … chaired I think by the Delta State Governor and the Governors also of Lagos, Kano, Bauchi, Anambra, Plateau and the Federal Capital Territory’s Minister,

As I always say, IDEAS is about Integrity, Democracy, Ethics and Accountability. And what we’ve seen from our State Governments and the Governors who head the executive there, has been the range. I mean there’s the range from those who started off and said: “We have to take it seriously”. Obviously you have Lagos State – where we are – the response of the State Government, the Governor, the Commissioner for Health, they have all been commended,

I think that we have to look at the context in which this is occurring Aghogho, and the fact is that … we’ve seen that apart from the actual physical and clinical impact of the COVID-19 virus, the economic impact has been even worse. In fact in Nigeria’s case – I was going to call it a ‘double whammy’, but actually, if we look at the fact that first of all, the first whammy is the simple shut down of the economy. Economic activities ground to a halt during Lockdown, and even though the whole country was not locked down, by the time you take Lagos, Ogun and the Federal Capital Territory

Now next week, the 4th of May to be precise, Lagos, Ogun and the Federal Capital Territory would begin a modification of the Federal Government-imposed Lockdown. Now one sector whose voice has been somewhat muted in Nigeria’s battle against the Corona Virus Disease has been that of organised labour. As the country joins the rest of the world in marking International Workers’ Day today, let us consider whether there are any IDEAS – talking about issues bordering on Integrity, Democracy, Ethics and Accountability – of particular concern to workers and organisations set up to fight for their interests in the COVID-19 crisis.

Ok, so what I will do is try to reach out to Ayo Obe again, so that we can set the ball rolling. Remember I said that today we’re looking at the Federal Government, the NCDC and the Corona virus testing strategy. Now Nigerians in Lagos, Ogun and the Federal Capital Territory are currently in the third week of a Federal Government ordered lockdown, and various states across the Federation are also grappling with a range of different varieties of lockdown

Yeah, as you know, IDEAS radio’s brief is to look at issues of Integrity, Democracy, Ethics and Accountability. And … so really it’s … our focus is the prevention of corruption and the promotion of transparency.