Episode 103 Blog – 1st April 2022 Ochendo Simon Okeke on the role of the Police in Accountability for our security. 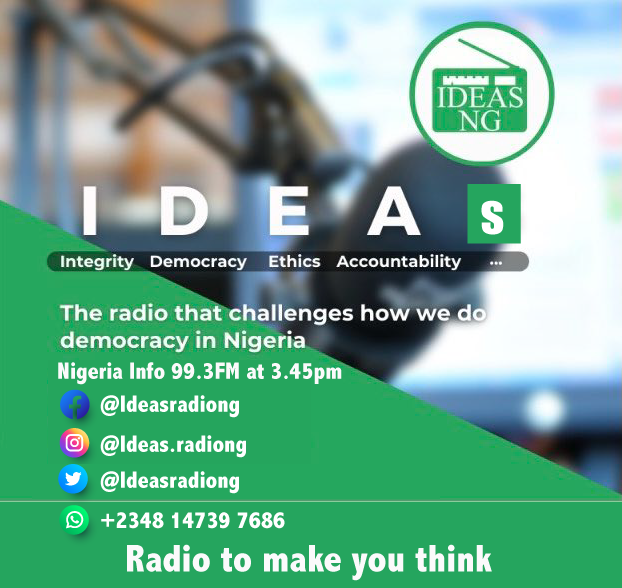 With the 28th March 2022 attack by terrorist bandits on a train travelling from Abuja to Kaduna with loss of life, injury and apparent abduction of some passengers, as well as a mounting toll from not just terrorist and bandit attacks, but also criminal kidnapping across the country, our guest on IDEAs Radio today is Ochendo Simon Okeke, who was Chair of the Police Service Commission from 2001-2006.

Ayo started by observing that security was the issue on everybody’s mind with the attack on the Abuja-Kaduna train.  She noted that we saw a very speedy response from the Armed Forces, but asked whether the security of Nigerians in the situation in which we find ourselves should be exclusively a matter for the Armed Forces, or whether the Nigeria Police has a role to play?  It was noticeable that while the Chief of Defence Staff, General Lucky Irabor was on the scene of the attack in Kaduna, the Nigeria Police was almost conspicuous by its absence, yet these are matters in which we would expect the Inspector General of Police to come forward and take the lead in terms of gathering intelligence, arresting criminals and assuring people of their security.

When Ochendo came on line, she asked how – as a former Chair of the Police Service Commission – he felt about the role that the Police has to play in being Accountable to Nigerians for their safety and security.  Ochendo said that our present security situation was most unfortunate, and that as pertains to the Police, not much appeared to have been seen from them.  Although the security of lives and property in the country was their responsibility, going by what was seen in the North, South, East and West of the country, there seemed to have been a total abandonment of that responsibility to the nation.  He said that maybe the Police have been overwhelmed by the avalanche of Boko Haram, kidnappers, bandits and so on.  Referring to the situation of Kaduna, with the attack on the airport, the road and now the railway, Ochendo said that one would have expected to see more than what had been seen so far.  For example the Nigeria Police has an Air Wing under an AIG or CP under its specialist sections but nothing had been seen of them.

Ayo asked whether it was just that we were not seeing what the Police were doing, because we always talk about the need for intelligence-led policing.  What was reported about the attack on the airport was that the attackers were “chased off”, and she wondered whether after the attackers were chased off by the Armed Forces, the Police should follow up with intelligence and investigation to find out who is behind such attacks.  Just as with the attack on the Kaduna train, it was one thing to repel the attackers and chase them away, but when the attack has happened, shouldn’t there be some policing activity?  Because at the end of the day it was not the Armed Forces who would be doing the investigation and arrest.

Ochendo strongly agreed, saying that it was the job of the Police to investigate and carry out serious intelligence work and find out what really happened and who was responsible.  He stressed that that was the work of the Police, not the Army, that the Armed Forces were tasked with the external defence of the country, while the Police was responsible for the internal security.  It is the Police who should carry out the intelligence work and use that to carry out operations – that that is their work, but that didn’t seem to be happening.

Ayo asked whether there was something that the Police needed to be doing in terms of re-establishing confidence so that the public would trust them.  She referred to a recent kidnapping attempt at an estate in Lagos where a man jumped into a woman’s car as she got out to let her children out to go to school.  When he was caught, he said that he had abducted many children by this method and taken them to Ibadan.  She was struck by the fact that the man was making his confession on social media, rather than to the Police, saying that as a result, his co-conspirators at Ibadan would have been warned and vanished with their other victims by the time there was any Police involvement.  She asked why the people at the estate felt it was more effective to put the matter out on social media than to go to the police and have some undercover investigation, tracing and apprehension of his co-kidnappers and rescue of their victims.

Ochendo said that he could not understand it.  It would be unacceptable for the Police to be looking to social media to get their information!  The Police should be up in arms to do the work of intelligence to stop this menace.

Ayo recalled that when Nigeria was faced with particular problems such as trafficking in drugs or people, special units were set up to deal with them: is it time for the Inspector-General to set up a special unit to combat kidnapping?  We hear of ransom being paid but we don’t hear of ransom money being marked or payments into bank accounts being traced.  Does Nigeria need some specialisation  not just for mass kidnapping which is making families in the North bankrupt themselves to pay ransoms to recover their kidnap victims, but also ordinary criminal kidnap victims.  Was there something the IG could do to restore and instil confidence?

Ochendo said that to the best of his knowledge the Police already had enough special branches and departments who could do the work of intelligence and stopping actions like that rather than setting up a new one, but it is to get what is already set up to be working.

Ayo asked whether that wasn’t the problem, that there was no public confidence in just going to the police?  We have no emergency response number like 999 or 911, rather we have a string of numbers that nobody can remember.  Ochendo felt that even if we had something of that nature, the public so distrusted the police that it would not work.

Ayo suggested that if the Inspector General should set up a unit whereby he could say with his hand on his heart that if the public were to go to them they could trust these people if kidnaps were reported to them, that they would not go into cahoots with the kidnappers – wasn’t there room for something like that?

Ochendo agreed that a Special Task Force could be set up to restore public confidence.  He said that he expects the Police to “Wake Up!”

Ayo remarked that that encapsulated the issue: that we appreciate what the Armed Forces are doing, but that at the end of the day there must be a Police input with intelligence gathering, investigation and follow up.

Ochendo emphasized that there needs to be a restoration of public confidence in the Police.  He drew attention to the situation in the South East where no police stations are working and the police don’t go about in uniform because they fear being lynched.

Ayo expressed the hope that if the IGP takes note of this, he will be able to take steps to restore public confidence and public trust in all parts of the country.  She thanked Ochendo for his participation in today’s programme and said that we expect the IGP to do that because – as the A in IDEAs stands for Accountability – we continue to look up to the Police and hold them Accountable for our safety and security.