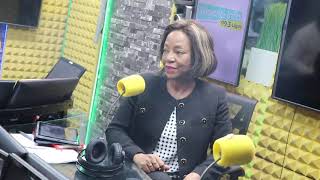 But really, what we have seen as the power of incumbency in the past is, that you have money to go to the Central Bank and collect raw cash, and just use it to bribe people, or use it to suborn them, or use it to buy votes, use it to deal with INEC officers.

Incumbency again has been, you use the power of the security agencies to go in massive force and so on.  So that, while we still see some of that, certainly in terms of the amount of ‘security’, that is put out, especially when we are having these individual gubernatorial elections.   But actually, we have not really seen it in terms of doing things that will make you very popular with the electorate, not just directly handing out bags of rice or tins of tomato paste or whatever.

I mean, we’ve all seen the situation where in foreign countries, especially where the election period is not fixed, the finance minister comes out with a budget, and people will say: Aha, this budget is a straw in the wind, there’s a lot of giveaways there for the voters.  And therefore, they discern that it must be an election coming.

AO: Yes, the Chancellor’s budget, there’s a lot there for the taxpayer, and therefore, they expect that he’s preparing with these giveaways to endear his party to the electorate.

Now of course, the electorate doesn’t have to be endeared, the electorate can say at last, we’ve now got something, now get out!  So it can be counterproductive. The point I’m making is that we as voters, we can observe these things and we can say:

Is this a genuine policy which is aimed at poverty alleviation and so on and so forth, or is it just an attempt at last minute, at five minutes to midnight, to sway us into voting for a party.  But the fact is, that no matter what the objective is, it cannot force you to vote for that party.

RS: Now, there are 91 registered parties in Nigeria.  There are two big parties as people say.  So, many people tend to see it in terms of APC or PDP but there are 89 other parties.

Surely parties that have not been in power at the federal or state level should also be able to influence events?  And citizens should be able to have the confidence that they can work through those parties.  We were discussing earlier the example of UK Independence Party in the Brexit elections.  I mean, UKIP is one of the smallest parties in United Kingdom.

AO: It’s not so much that it’s small, it’s that apart from members of the European parliament, it hasn’t actually won any elections within Britain.

RS: Within the UK, they had one defector MP

AO: Yes, they had one defector, one carpet crosser

RS: And he lost.  But UKIP forced Brexit to happen more or less, and it is the biggest political issue in Europe …

AO: Well, not in Europe but it’s certainly going to have a massive effect on British politics and the fate of the British nation going forward.

And the point I wanted to take from that, because we tend to have this approach in Nigeria that the only important thing is to be on the winning side, and again, the IDEAS programme wants voters to look more critically and see whether they can’t influence policies by supporting other parties, by refusing to be straightjacketed into this two party system, because the more we buy into that, the more we make it inevitable that those will be the only options available to us.

So it’s important that we keep our eyes and ears open.

Now, we’ve seen in regard to this coming election that there have been various attempts at coalition.  For example…

AO: CUPP, but earlier, there was this attempt by certain candidates to decide which of them would be the one that they would all support …

AO: Yes, PACT.  Now that didn’t go through, but I think rather than Nigerians saying ‘Oh, they’re all the same’ and so on and so forth, I think we should again look at it because maybe their mistake was in focusing only on the presidential issue.  With CUPP, I don’t have a political crystal ball, but it would surprise me if the presidential candidate from that is not from the PDP which is the major party in it.  But there are other parties in CUPP, and they are contesting at various levels, and so the question is going to be, will the pact hold, if it holds at the presidential level, will it also hold at the level of State House of Assembly, or at the level of House of Representatives, or gubernatorial elections?

When you come to discuss Osun State you will know whether CUPP is a working pact or not, because it seems to me that some of the candidates in the pact are still contesting against each other, there’s been no coming out to say: We all in this CUPP are all supporting the so and so candidate, whether it is the PDP, SDP or whatever it is.

But a week is a long time in politics as they say, so we should be looking out for the possibility that by members of the pact deciding to support at different levels, individual legislators, they could in fact find out that some of these smaller parties ends up sending a very popular person to one of the legislative houses.

AO: Definitely a government in power is going to disappoint people, but I want to say that one of the things that the IDEAS programme would hope to encourage, when I say that we want voters to start thinking for themselves, I think it’s important that we get them to understand that the issue …

I happen to have been at the Bar Association conference last month in Abuja, the Nigerian Bar Association… and I was on a panel where one of the panel members said that: Corruption under this administration is worse than it ever was under the previous administration; that at least the previous administration it was open, and you know, almost like an all-comers affair, whereas under this administration it is secretive and restricted to a few select people.  And the thing that struck me was the way that the audience, which was of learned people (like myself) they all, they were cheering!  Some of them were standing up and cheering and clapping,

RS: It was a standing ovation?

AO: Well, not quite, but it got a lot of cheers.  And for me, I thought, is that because people only see it through the narrow prism of political advantage for one side and political disadvantage for the other, and that we, the people who are actually affected by the corruption, whether it is the open all-comers affair of the previous, or the secretive select few of the current as alleged, is it that it, that that doesn’t matter to us?

I would like the IDEAS programme go beyond saying corruption is useful only as a tool to beat my political opponent with, rather I would want us to say: This corruption affects us, and we’re going to affect corruption!